Trichromancy is a deckbuilding game where each of your characters has their own deck.  Your deck consists of cards that can generate mana and cards that can use the mana for dealing damage.  Mana that is generated can be used by anyone, even the enemies!  You'll need to balance generation of lots of mana in order for you to use big attacks without allowing your enemies to cast big attacks on you with the mana you make.

Each character's turn consists of:

Some limitations on how you play cards:

There are "Bonus Actions" available in the bottom center of your screen that are basic mana generators to be used by anyone.  They use 1 AP, but can be used multiple times per turn.

Win the battle by dealing enough damage to your enemy before they knock out all of your mages.  Good luck!

A glossary of terms and symbols used in Trichromancy.

From the main menu, choose New Game to start your adventure.  Once clicked, you'll see the 3 save slots available.  If you've never played, they may all be empty, so you can choose any save slot you'd like.  Picking a save slot will keep using that save slot until you start a new game.

Once you've chosen a save slot, confirm that you want to use this save slot for your game.  If you're overwriting a game that was previously saved, you may want to cancel to choose a different save slot.

Your party consists of three mages, each with a color specialty to start.  Each mage's info panel shows:

There are two main types of cards in Trichromancy.  All cards are available to mages and enemies.  During battle, you'll see a letter in the lower left, which is the keyboard shortcut to cast that card.

In the shop, each mage can purchase cards or upgrades for themselves using their individual gold.  Each purchase will ask if you want to confirm before buying, as there are no full refunds!  Cards can be sold back to the store for half of the purchase price.

Note that the cards available for your mage will change if you buy color power upgrades, including multi-color spells.

To sell cards, click on the Sell Cards button on your mage in the upper right.  Only cards in your sideboard can be sold back to the shop. 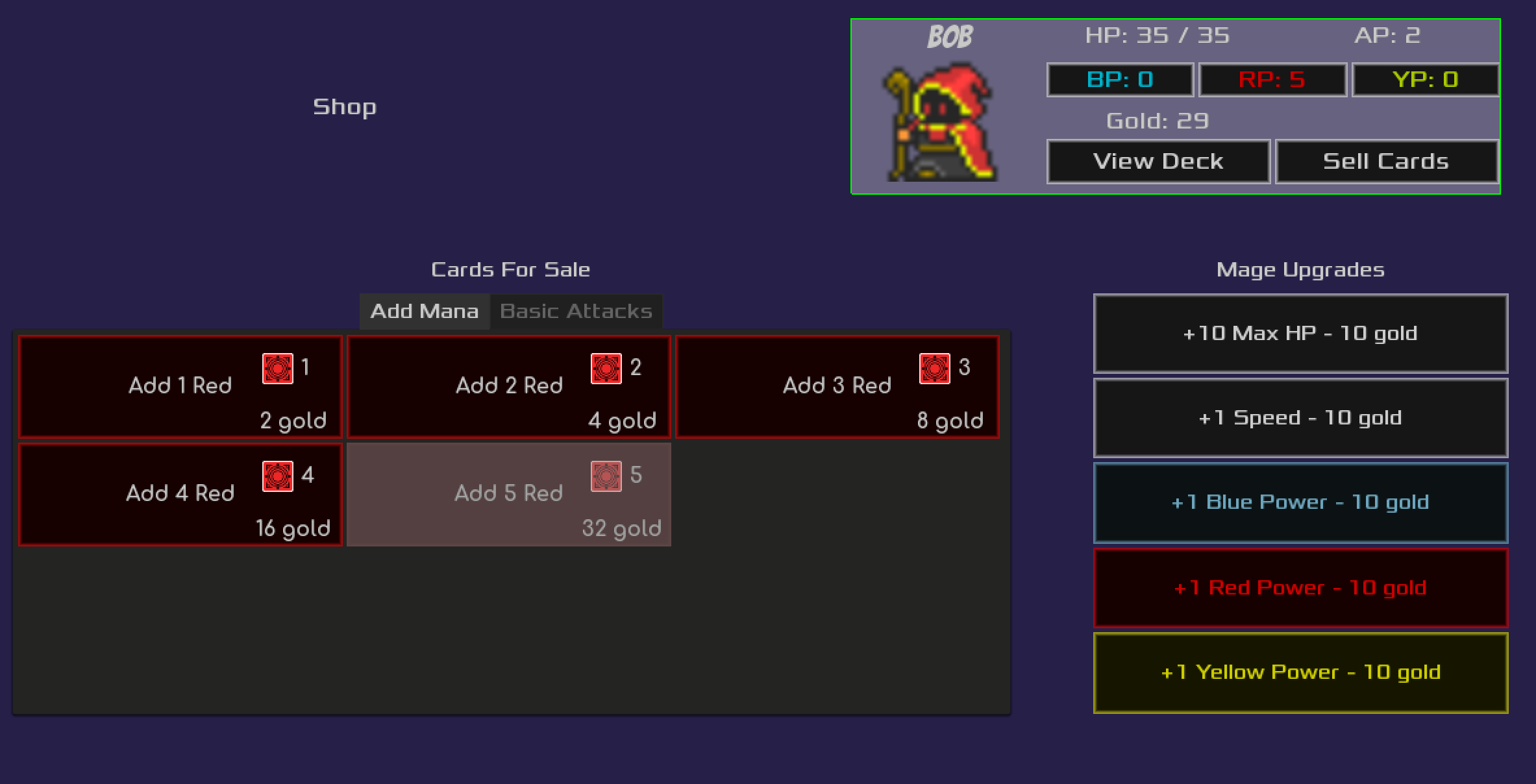 To assemble your deck prior to battle, click on View Deck in Town or in the Shop, then click on the Edit Deck button at the bottom of the screen.

During battle, each character will take turns based on their speed attribute.  Each character must fully use all AP (action points) before ending their turn.  Each card uses 1 AP.  Any cards that can't be played will be disabled until they are playable, and each card can only be played once per turn.  Available cards in hand show up in the lower right corner.

In the lower middle section, there are 3 "Generic Actions".  Any character can use these actions as often as they'd like instead of the cards in hand.  This can be useful if you want to set up another character's attacks, or if you don't have any other good options.

Any mana that is generated by any character can be used by any other character, and stays there until it is used by someone.

Each "pile" of cards for each mage can be clicked to see what cards have been discarded, drawn, or are still in the draw pile.

There is no way to heal your mages in a battle, but they will all heal fully when back in town. 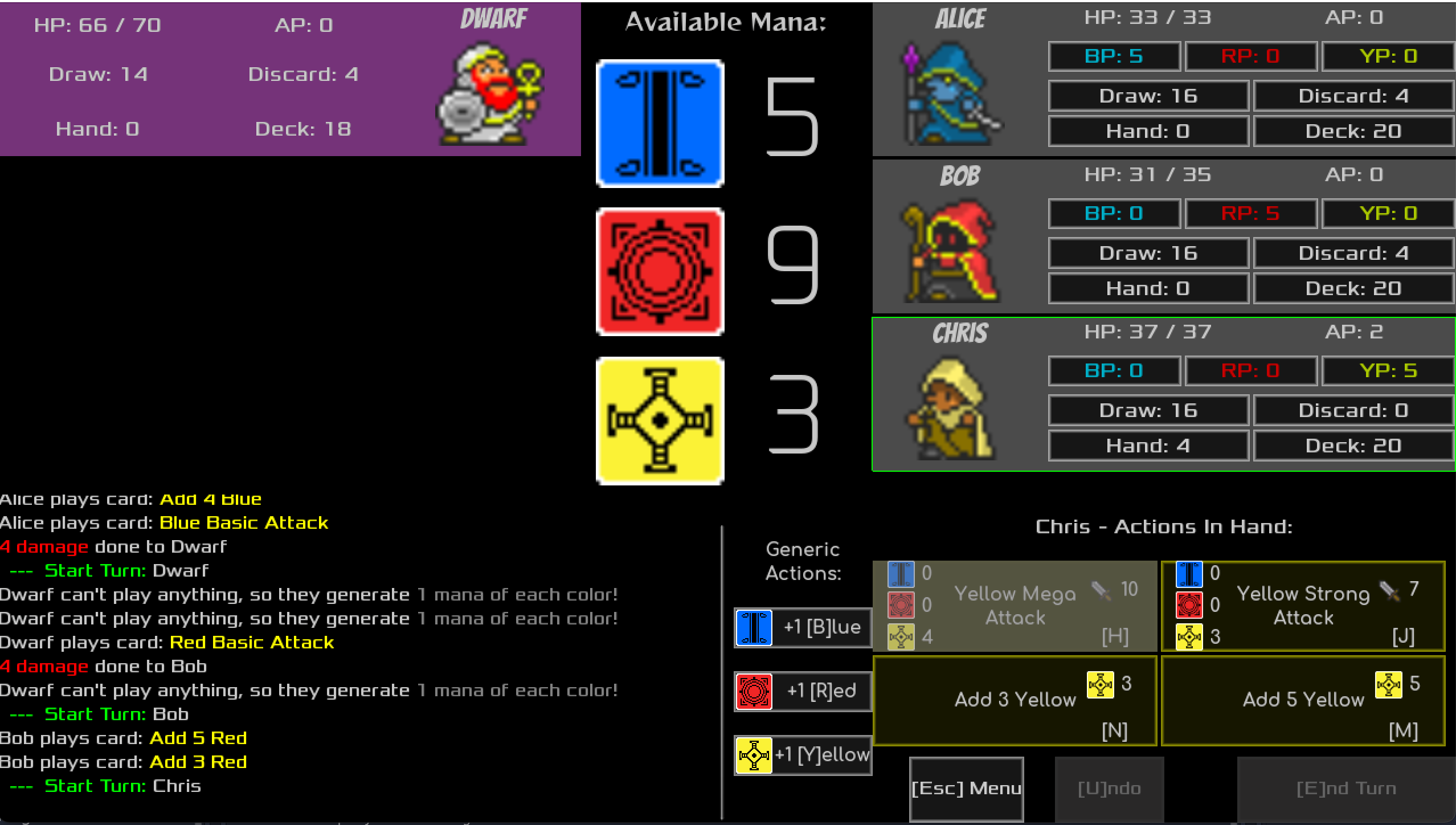 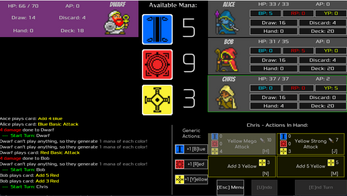 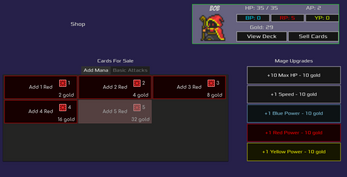